I. Bashing Sweden, or: naked cynicism

Various doomsday headlines, all appropriately hedged, have been circulating for days regarding Sweden’s decision to forgo a lockdown in response to the coronavirus pandemic. You might also have noticed a pre-emptive defense against the suggestion we may be overreacting (Washington Post: ‘The lesson of revised death toll estimates shouldn’t be that distancing was an overreaction’, Vox: ‘Why we’re not overreacting to the coronavirus, in one chart’).

It will suit my own purposes here to remark that the first of these publications declared a Trump victory all but impossible in the weeks leading up to his 2016 election. Now as well as then, such headlines are consistent with a brand of gotcha journalism too concerned with content production to pursue proportion in its reporting, and should be weighed accordingly.

Although we ought to welcome a self-negating prophecy—wherein the precautionary principle, having demanded an overreaction in the face of uncertainty, succeeds despite its excesses—we should not voluntarily involve ourselves in a self-fulfilling prophecy, wherein the excesses of our approach are assumed to be responsible for its success while the uncertainty goes unresolved.

For example, suppose one measure (such as closing schools) imposed by Country X has a negligible impact on the course of its epidemic. In this case we would not want to falsely claim it worked, both for the benefit of posterity and for any future response under comparable circumstances. Yet without a reference—Country Y, which kept its schools open—such an assessment becomes difficult or impossible.

‘Overreaction’ and ‘underreaction’ refer us to the notion of an ideal reaction. But since there is no such thing as perfect information in the real world, no ideal reaction is possible—not even in retrospect. Therefore, insofar as uncertainty still looms large, we stand to benefit from a variety of approaches to the pandemic in the near to medium term. They will allow us to better ascertain the virus’s behavior and the appropriate response.

II. Bashing Sweden again, or: the poverty of public discourse

Any criticism of Sweden focused on its rising death rate misses the mark, as this result was anticipated—hence the controversy.

In the pandemic response (‘flattening the curve’), there are two possibilities we should take care to distinguish. In the first, the total number of infections at the end of the pandemic is lower than it would have been in the absence of interventions. In the second, the total number of infections is the same, but they occur over a longer period of time.

The first depends either on containment (i.e. extinguishing the virus), immunization through vaccination, or both. But sustained containment of a highly transmissible pathogen already infecting tens of millions of people is unlikely. Consequently, pursuing it forces us to bet on a vaccine—even if we don’t know whether or when we’ll get one.

The second depends on mitigation, or slowing the virus’s spread. The reason should be clear: if a sizable proportion of any infected population requires hospitalization, as there is substantial evidence to suggest in the case of COVID-19, allowing unmitigated pandemic progression would lead to excess deaths due to limited health care capacity. (Although we may rightly ask why so few state health authorities seem to have taken pandemic preparedness seriously. Equipment stockpiles, reserve capacity, and a reserve medical corps are all warranted given the regular appearance of novel pathogens.)

The confusion stems from the overlapping means to both ends: namely, physical distancing. Many jurisdictions seem to have targeted both possibilities without necessarily communicating the strategy openly. After all, extinguishing the virus is possible. And even if it weren’t, the more time we buy, the better the odds of an effective treatment or vaccine saving the day. This is the bet made by nearly every state health authority the world over.

Except, of course, for Sweden. They are taking for granted that limiting the total number of infections is a long shot with significant risks of its own. To avoid a succession of epidemic waves, they are gambling on a mitigation strategy, supported by their peculiarly self-isolating population. They fear any attempt to flatten the curve too forcefully may only push it forward in time. A counterintuitive consequence is that one should expect to see more deaths now rather than later.

Better to adopt sustainable mitigation practices than exacting suppression measures, Sweden argues. The former should draw a broad curve over time as the virus makes its way through the population, while the latter would eventually be abandoned by citizens—and could maim ‘the economy’.

III. ‘The economy’ is not your enemy 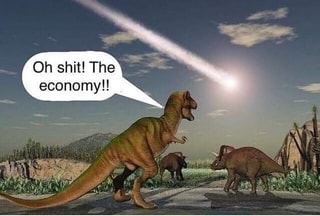 ‘The economy’ is not a synonym for ‘finance’ or ‘stock markets’, nor is it the exclusive domain of the rich. It is a clunky term designating a disparate set of processes and relationships which sustain us materially as well as psychologically.

When someone argues against a well-meaning humanitarian policy on the grounds of its potential economic consequences, it’s easy to dismiss them as choosing abstract principles over real people. But the fact that ‘the economy’, thus abstracted, is so often used to push through policies favoring the rich does not mean its operation is inconsequential or purely spectral. (It’s worth noting that ‘the law’ suffers from the same abusive misuses.)

Furthermore, we should refrain from importing the terms of the climate change debate to the current discussion. The horizon for climate change is long by most accounts; it therefore affords us the opportunity to gradually reform our modes of production and habits of consumption without wreaking undue havoc on people’s lives or livelihoods. The risks associated with climate change are not precisely known, but the entire range of possible futures—from the optimistic to the cataclysmic—is cause for alarm.

In this pandemic, crucial details about the virus—its lethality, its transmission patterns, its prevalence—remain murky. But its horizon requires immediate action. This makes any response a fool’s errand with potentially disastrous consequences of its own. Shutting down entire sectors of activity, ‘inessential’ though they may seem, risks disrupting key supply chains and threatening food security, in spite of whatever your local authorities may claim.

Should this occur, who would be hit the hardest?

IV. Real poverty is a concern only when it threatens property (or propriety)

Or we could ask a related question: in a pandemic, who gets to stay home?

Typically not the people who have no homes. Yet the Plante administration has undertaken to shelter them, as they now threaten the health of Montrealers. This should give us pause: why act on homelessness now? Has it not always been a categorical evil, the utter destitution of the people it afflicts?

With a baseline for what Canada’s universal basic income will one day be, we should ask why a pandemic was necessary to act decisively here too. And what of the workers who earn less than this baseline: grocery store personnel and some orderlies, to name but a few? Are they only now essential, or have they always been?

V. Eulogies are not preventive measures

Currently, we don’t know which of the measures we’re enacting are effective and which are mere superstition. But we know for a fact who is most at risk: the elderly—those who built our society, in Legault’s words again—and the immunocompromised.

Now consider the dissonance: we are physically distancing ourselves from everyone we know, ostensibly to protect those at risk, while our long-term care facilities are to the novel coronavirus what a parched field is to errant lightning. Little wonder such a staggering proportion of deaths in Quebec so far have been among the elderly housed therein.