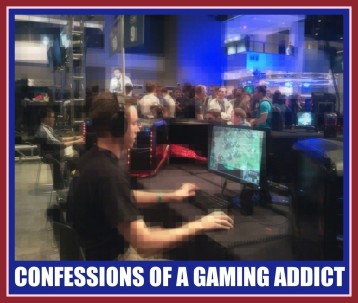 I lived in a regular home and grew up with loving and supporting parents. I was as normal a kid as they come. Yet at some point gaming had become a large part of my life, at one point it was my life, a life that could be accessed via a computer screen. This had unfortunately lead to encounters of a negative nature with family, friends and of being manipulated through this addiction. Only now do I realize the addictive nature of gaming. Such a past time as this is not injected or physically ingested so it is difficult to see that it acts much like a drug, as we become addicted to the over-stimulation that it provides us. Coupled with the fact that online interactions have little or no intimacy left me feeling even more alone and isolated than I actually was.

Gaming acts as a fast forward button for friendship; these connections are developed in this way because gamers do not take the time needed to get to know the person in question. Rather, they skip these introductory steps and delve into the game; never having the opportunity to learn who the person is. The source of this burden lies behind the fact that while connections and trust are being built, the foundation of these are not strong; like a Jenga building that is lopsided and missing many blocks. These relationships then perpetuate because we seek self worth through them, but instead of finding ourselves to have worth we become more empty inside.

I continuously made excuses when facing my gaming addiction. These varied from labeling it as a passion to listing all the ways in which it benefited me; like an alcoholic using the excuse that booze makes him more extroverted and talkative. To admit that such a problem existed meant that the comfort found within the addiction, no matter how twisted it was, would vanish.

Withdrawing from gaming is a complete psychological war against boredom. This is because my brain had become hardwired to the over-stimulation that gaming provided. While finding new ways to spend all that extra time is maddening, it is also a very crucial part of the process. As a gamer, time seemed too short – the day was never long enough. However, my love for philosophy and long walks that had been previously squandered by gaming helped ease this process. I think our feeling of satiety is largely influenced by how much time slows. When I really take the time to eat or when my stride shortened with many unexpected stops I begin to feel much more satisfied. The paradox between fulfillment and time is troubling because taking the time to do nothing but carry out the most basic human of functions ends up being a reliable way of getting that satisfaction. As we’ve come under the impression that we’re resources to be exploited. Similar to how we tell our kids that they have so much potential. It’s the difference between walking peacefully through a lush forest or chopping it all down in order to make full use of its resources. One can’t be in a rush to be fulfilled as that’s just missing the whole point. In that satiety only comes when time is no longer a limitation. It’s akin to the romantic tradition of wine at lunch, in which one ought to let the day stretch on through thought and conversation. It makes one wonder whether gaming is a byproduct of a time crazed society in which coffee, over stimulation, exploitation and strict schedules have come to dominate our culture.

When I was gaming, I had fallen into a group of gamers that I thought shared my values and goals. However, my steady rise within their ranks was unable to bring the feeling of satisfaction that I yearned for. There was a lingering sense of worthlessness every damn time. The leader of this group had become my mentor. At the age of 16, I had no clue who this person was; all I knew was that he was helping me. I had no idea that he was playing on my insecurities, which over time manifested into something much more troubling.

When I had reached the age of 19, my life was starting to fall apart. With this mentor’s guidance, I had decided to drop out of college and work for the gaming community. By doing so I’d have a chance at making a living within the gaming world. Yet in the eyes of this mentor, such an endeavor required a closer way of teaching. Thus he created a competition with 2 other boys for a chance to go and learn from him in person. This created a need, the fact that this spot was not given, but to be earned only made my situation much more desperate. In this desperation we acquired a blinding form of acceptance. Thus coming to terms with a comment such as this “Additionally, nudity, sex and the whole thing is important.” and the following events a required evil.

At the time I had no other choice, I had very little self worth and was looking for a way out. Gaming has that effect, we begin to feel more and more worthless because the over-stimulation we get in games has no sense of intimacy. It left me feeling like I had nobody to turn to, I had lost the ability to feel comfortable around people. Luckily much of these feelings went away when I completely eliminated gaming from my life as it forced my body to re-adapt to a natural way of living. Where my social needs are met through real people that can provide comfort that a cold tin box never could.

In this same group of gamers, passion was the pet topic within the community. We all believed that our passion for gaming would lead us to the good life. What we did not know or just ignored was that the time we invested within gaming really doesn’t affect anything outside the gaming world. It’s less about making an impact and more about feeling like we’re doing something useful with our time. It becomes an escape when paired with instant gratification and people whom we do not know personally, as we become attached to the feeling of being valued. This attachment becomes reliant on gaming itself, which drives us deeper into an imaginary world where we get to escape our problems. What this ends up causing is the illusion that we have many friends. Similarly, people who are solely drinking buddies aren’t really our friends, just a person who has a shared interest. Without the games or the booze, we come to find these people much less interesting than their online counterparts and it’s not like they’ll ever come visit us in the hospital either. It’s as if we never even knew them in the first place. What ends up happening is that this false sense of trust and security only lasts for a little while until we start to feel rotten inside; slowly eating away at our conscience.

Now that gaming is in the mainstream, thousands of kids are flocking to its beckoning call of self fulfillment and over stimulation. The whole industry is based on entertainment, and there’s no limit to how much a gamer can play. A soccer player will eventually tire out and have to stop playing soccer. This forces the player to spend his time doing something else. Coupled with the fact that a gamers friends are usually thousands of miles away, it’s not like they can go and get to know each other better once the game is over. Instead, they’re left alone in front of a glowing image of fulfillment where their whole life can be accessed from a box humming a melancholy tune right beside their feet.

p.s. This was written at a time when I was still processing and figuring out what I was going to do with all that new found time. I think everyone needs some sort of way in which they can escape from the tough times in their lives, and for me gaming played that role. The problem was that I let it take too much control of my life. When it comes to ways of escaping and viewing a world that is beyond our own, it becomes a balancing act and question of whether it affects our personal and professional lives. As it’s a silent addiction that steadily grows until you find yourself as isolated and lonely as ever, and can’t recall when it happened. To this I commend Alex Vinetti for finding a way to overcome that negative barrier with his son that gaming often puts up around family and friends.

One thought on “Confessions of a Gaming Addict”