Having recently trolled the likes of Mark Zuckerberg and a certain Google co-founder, Kanye seems poised to become the Black Lives Matter movement’s answer to Donald Trump. Pathologically incapable of doing as he’s told, he’s made misogyny more plentiful on TLOP than anywhere else in his corpus. But as the recent father and apparently dedicated husband that he is, I don’t buy any of it. Misogyny is to Ye as homophobia was to Eminem in the early 00s, and now just as much as then people don’t seem to catch on. (Hint: it’s a middle finger to the coercively totalizing PC discourse of safe spaces and ‘n word’-style censorship by omission, a phenomenon marvelously satirized by the last season of South Park.)  Here Kanye finds himself in decent form: he achieves sublimity at the outset by dint of some Chance grace, unleashes a moment of pure joy while sampling “Bam Bam” on “Famous”, and establishes his allegorical bona fides on “Wolves”. In contrast to the compressive tension which wound Yeezus into a sobering sonic boom, there is significant dithering here – and even a few forgettable tracks. Thankfully, Ye’s sense of humor thrives in the self-aware self-sendup “I Love Kanye”. And he’s not so much out of his mind as he is hell-bent on pretending that he is. In the alleged megalomaniac’s own words: “Everybody gon’ say something / I’d be worried if they said nothing.” B+ 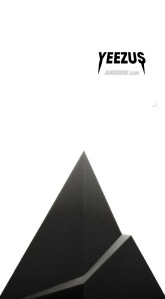 Hailed as manifestly id, Yeezy’s zero-fucks-given art album has plenty of ego – not to mention superego to spare, as when he convincingly fuses the political and the personal on “New Slaves” by calling out the CCA and then promising to fuck a shareholder’s spouse. Less a primitive attack than a chest-beating demonstration of the indomitable spirit he so luxuriously represents, this kind of sexual braggadocio is common through the album’s terse ten tracks but never feels trite. Abrasive at first blush, the strident production tricks gradually reveal an aesthetic which sonically unites 808s & Heartbreaks and My Beautiful Dark Twisted Fantasy – except that the latter’s excesses and the former’s bathos are here muted in favor of darker, more confrontational, more contrarian excursions reified by the numerous descents into dancehall. As the rhythmic and melodic turns and screeching halts unravel, Justin Vernon’s signature Auto-Tuned pleas provide the link, like the Holy Ghost beckoning to Yeezus. A