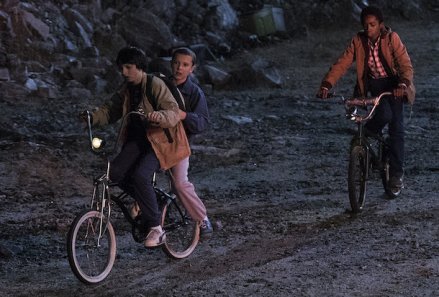 Watching Stranger Things on Netflix reminds me that growing up in the Eighties wasn’t all bad. It’s so nice to see free-range kids biking around their neighborhood, getting into trouble, and having adventures. So nice to see kids who have a life, kids with free time, kids who aren’t being shuttled around by harried helicopter parents, in minivans, from one structured activity to the next. And it’s so nice to see kids resolving conflicts amongst themselves, and managing their own social lives, without the constant intervention of meddlesome grownups with PhDs in Sensitivity.

I took the kids of Wild Side Day Camp to Nun’s Island today, a place I’ve been going to for almost thirty years. It’s still a magical place—replete with herons, owls, turtles, snakes, frogs, and salamanders—despite the fact that most of the forest has been replaced with upscale apartment buildings. Among the new additions to the island is an exercise park, which is basically like a kid’s park for grownups.

We stumbled upon it more or less by accident, and, as you might expect, the kids immediately started to play with the equipment. They came up with all sorts of novel uses for the stuff and invented a remarkably creative game which went on for two hours. From time to time, health-conscious adults would show up in spandex (which, let’s face it, makes any adult look ridiculous to a child). They seemed annoyed that the kids were there, using their stuff, though nobody came out and said so.

I’m usually not that interested in what the humans are doing on Nun’s Island. But today, at the exercise park, I felt like an anthropologist. And I noticed some interesting differences between the ways that the kids and the adults interacted with the park: (1) Everything the grownups did with the exercise equipment was repetitive, boring, and predictable, whilst everything the children did with the same stuff was spontaneous, creative, and unpredictable. (2) The adults looked miserable whilst working out at the park.

By contrast, everything about the children—their screams and shouts, their smiles—radiated pure joy. This leads me to the following conclusion: Maybe working out is boring and chore-like because it’s so utterly devoid of randomness and playfulness. Maybe it’s time to take the “work” out of working out.

—John Faithful Hamer, Parenting in the Age of Studies Have Shown (2018)