It is a common conceit that China is winning in business because of (insert one of):

While there is some truth to these theories (and more!), these are not the whole story, nor are they the main story.  #1, for example, is behind the times.  Chinese labour is nowhere near as cheap as it used to be (and indeed this is making Chinese companies and the Chinese government try to set Africa up as China’s China).  #2 is just silly.  First, all countries (even the sainted home of purest greed capitalism: the USA) manipulate currency.  Second, there’d be far better manipulations the Chinese government could make if they were trying to win that way.  #3 is true to a point, but this is changing and, again, it’s hardly unique to China. 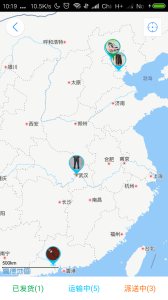 There is a far more important reason why China is kicking your ass in business and you can get a taste of it in the picture to the right.  This picture is a perfect visual summary of the situation; why China went from a mostly-agrarian society to the #2 economy in the world in the time I’ve lived here (15 years).

What you see here is a screenshot from my phone. It shows nine packages in transit. Each package comes from a different seller (9 sources). 7 different logistics services are involved in delivery. (Two sources happened to choose the same courier company.)  It breaks down the deliveries into “not yet picked up” (1 entry), “in transit” (5 entries), and “final delivery” (3 entries). For the latter category it tells me the name and the phone number of the courier (the person, not the company!) delivering the shipment to its final destination.

This app amalgamates purchases, shipments, and deliveries from a wide variety of online shopping places and logistics services. It gives me a lot more information than I’m showing in this map too. If I click on an item, it shows me both the route taken thus far and the projected route of the item to its destination, for example. I can scale right down to street maps to see where the warehouse that last had the shipment is should it come down to needing to trace the delivery.

I’m only barely scratching the surface of this one, single app too.  There’s a lot of other tools, both seller-oriented and buyer-oriented, packed into this app.  As a seller, for example, I can use it to help choose the best logistics company for a given shipment, to track my own outbound shipments, and to do a whole bunch of other stuff I haven’t managed to decode yet.  (My Chinese skills aren’t up to the task, unfortunately.)

Keep this in mind next time you wonder why, say, Apple, an American company, gets all of its products manufactured in China.  Because this is why China is kicking your ass, and not cheap labour or currency manipulation or whatever other conspiracy theory you want to dream up.  What really gives China an edge in business these days is the highly-efficient, tightly-integrated logistics systems that are omnipresent: B2B, B2C, and even C2C. Keep that in mind when you want to know why production is being outsourced.

“Cheap Chinese junk” made by “low-paid, unskilled labourers” is a thing of the past. “High quality goods” (assuming you pay for that quality of course!) with phenomenal customer service is the new China.