Dogs have been in a deeply significant symbiotic relationship with our species for at least 50,000 years. They’ve selflessly defended our settlements from large predators like lions and bears, helped us on hunts, served as sentries, kept us warm on cold winter nights, and much else. They’re sort of like family at this point. And they’ve earned the right to special consideration. This is precisely why, incidentally, I’ve often argued that eating dog meat ought to be taboo the world over. Eating a dog isn’t as bad as eating your cousin, but it’s close. The emotional bonds people form with their dogs are deeply meaningful and surprisingly strong. People who don’t have dogs often fail to realize this: the family dog is in fact a member of the family. Hardcore dog lovers don’t care about animals more than people, they just care about family more than strangers (like the rest of us). 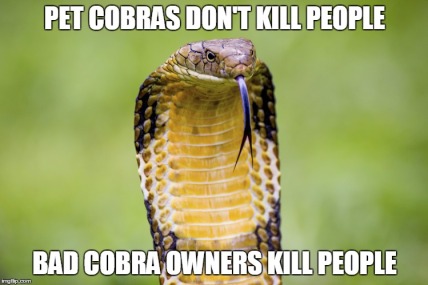 Just as gun control takes guns out of good people’s hands, pit bull control takes good dogs out of good people’s hands. Like eminent domain, it’s not pretty. But neither is the permanently disfigured face of a kid who’s been mauled by a pit bull. Look, I get it. I know how easily dogs can become beloved denizens of our hearts and homes. But we all have to make sacrifices if we’re gonna make this whole city living thing work. I have loved snakes my whole life and would love to get a pair of pet cobras. But I can’t because it’s against the law. Because pet cobras would be potentially dangerous to my neighbors.

I once met a woman in Verdun who’d undergone three operations and a whole lot of plastic surgery to repair the damage done to her face by a house cat. But nobody’s calling for a ban on house cats. Why? Because attacks of this kind are rare. Pit bull attacks aren’t nearly so rare. Can other kinds of dogs become violent? Sure. But, once again, nobody’s calling for a ban on all domestic dogs. Because all domestic dogs aren’t created equal. Some breeds are, statistically speaking, more likely to become dangerous. As my friend Sara Coodin put it: “It’s wishful ignorance to say that all breeds are equally susceptible to violence. No evidence bears this out. As an owner of two very large dogs, I can confidently say that nature/breed is highly determinative with dogs. Yes, there are sweet pit bulls, but they also have a proclivity towards aggression and a bite strength that makes them incredibly dangerous when they’re raised to fight.”

As Dmitry Belyaev demonstrated with his famous fox experiments, you can transform a wild animal into a docile pet in as little as ten generations by selecting for docility. Does it not stand to reason that you can create a dangerous breed of dog by selecting for aggressiveness? My students from way up North tell me that if a husky bites, it’s shot. They’ll even, at times, kill any of its offspring. In this way, apparently, they’ve been selecting for docility in huskies for a very long time. What was done to the various breeds known as pit bulls is precisely the opposite kind of selection.

Just as the NRA maintains that “guns don’t kill people, people kill people”, there are those who maintain that “pit bulls don’t kill people, shitty dog owners kill people”. I must confess that I’m highly sympathetic to this argument. But it’s ultimately besides the point. Because we can’t regulate the human heart. We can, however, regulate guns and pit bulls. This is, at bottom, a public health issue, and it needs to be seen as such. But pit bull owners refuse to see it as such. Because, as Shakespeare rightly observed, “love is blind, and lovers cannot see.” Pit bull owners love their dogs. I get that. And I’m genuinely touched by it, truth be told. But love can cloud your judgment.